Serving those who served our country

America’s veterans face end-of-life difficulties that other hospice patients do not. From PTSD to substance abuse, to moral injury issues that haunt them throughout their lives, veterans present a unique set of needs. Recognizing veteran concerns, Angelic Health has partnered with the National Hospice and Palliative Care Organization (NHPCO) We Honor Veterans Initiative to respond to the increasing needs of those who served this country. This focused program offers guidance and resources for veterans and their families during the challenging time of a terminal or life-limiting illness.

Looking beyond the diagnosis and understand the history of these men and women as it relates to their experiences in military service, Angelic Health staff are well- versed in the trepidations that veterans confront at the end of life. The We Honor Veterans program at Angelic Health provides a resource guide and education for hospice nurses, aides, social workers, professional support staff, and volunteers, as well as healthcare facilities, and the public on how to recognize and treat veteran-specific concerns. Recognizing the military service of individual patients with pinning, certificate and flag presentations provides an opportunity to thank our veterans face-to-face.

Because many veterans and their families are unaware of the resources available to them, Angelic Health Hospice offers a holistic support which includes working with veteran organizations within the community and connecting veterans to services and programs that can help their situation. We provide quality end-of-life care to our veterans is to learn more about them, and address concerns surrounding isolation, trauma, and their illness.

Each era of service presents its own specific concerns. It is important to understand that there were and continue to be many concerns about the association between the illnesses and symptoms veterans report and their exposure to toxic agents, environmental and wartime hazards, and preventive medicines and vaccines they received. In addition to physical health issues, the experiences of veterans including death, torture, mutilation, and both civilian and military atrocities contribute to mental health issues such as PTSD, depression, anxiety, substance abuse, homelessness, anger issues, and suicide.

While military veterans all have similar maladies from exposure to nuclear, chemical, or biological agents, trauma from artillery, and assaults on the mind and body, each theater presents specific problems.

The Vietnam War was a long and unpopular war, and for many veterans the wounds of Vietnam will never heal. They reported coming home to a hostile civilian environment, being spat upon, and being uncomfortable wearing their uniform in public. Following the war, Vietnam vets experienced readjustment problems and adverse health effects attributed to Agent Orange.

According to the We Honor Veterans initiative, cold injuries including frostbite and immersion (trench) foot constituted a major medical problem for U.S. service personnel during the Korean War. It is important for health care staff examining and caring for veterans who have experienced cold injuries to be familiar with the recognized long-term and delayed symptoms. These include peripheral neuropathy, skin cancer in frostbite scars, and arthritis in involved areas. Cold-related problems may worsen as veterans age and develop complicating conditions such as diabetes and peripheral vascular disease, which place them at higher risk for late amputations.

During WWII, morbidity from such diseases as tuberculosis, rheumatic fever, hepatitis, and tropical diseases was high. Besides infectious diseases and wounds, other health risks of WWII included injuries from excessive cold which may result in long-term health problems, including changes in muscle, skin, nails, ligaments, and bones, skin cancer in frostbite scars, vascular and neurologic injury with symptoms such as bouts of pain in the extremities, hot or cold tingling sensations, and numbness.

In the 1940’s, the Department of Defense recruited “volunteer soldier” subjects for experiments using mustard agents to evaluate clothing, ointments, and equipment to protect American troops from mustard agent attacks. The We Honor Veterans project reports that nearly 60,000 military personnel were involved in research from drop patch testing to severe, full-body exposures.

Veterans who were involved in the occupation of Hiroshima and Nagasaki, Japan, and veterans who were prisoners of war in Japan during World War II may have participated in nuclear cleanup.

Blog: Veterans May be Unaware they have PTSD

Donald Long is a man of service. A former Marine, stationed in Okinawa, Japan and after his tour of duty he became a police officer in Bridgeton, retiring a few years ago after 21 years. A native of Deerfield Township, he works for a security service and donates his time as a hospice Vet to Vet Volunteer. “My daughter Kaitlyn is a hospice social worker and mentioned about the opportunity to speak to veterans and the need for Veteran volunteers,” said Long, “I find it very interesting hearing about the experiences of fellow veterans, especially those who served in combat.”

Long visits Angelic hospice patients and participates in the Veterans History Project. All U.S. veterans are invited to participate, regardless of branch, rank, or gender. They may share a recorded oral history, as well as donate original photos, letters, etc. Each veteran will have his or her own webpage on the Library of Congress’ website. Their story will be preserved and made accessible forever at the Library of Congress. Volunteers are needed to help record these priceless interviews.

The U.S. Congress created the Veterans History Project of the American Folklife Center in 2000 to collect, preserve and make accessible the personal accounts of American war veterans so that future generations may hear directly from veterans and better understand the realities of war. Learn about becoming a Vet to Vet Volunteer by contacting Kayla Montoro, volunteer coordinator at KMontoro@angelichospice.net, or call 609-515-2330.

Photos of Presenters at the training included: 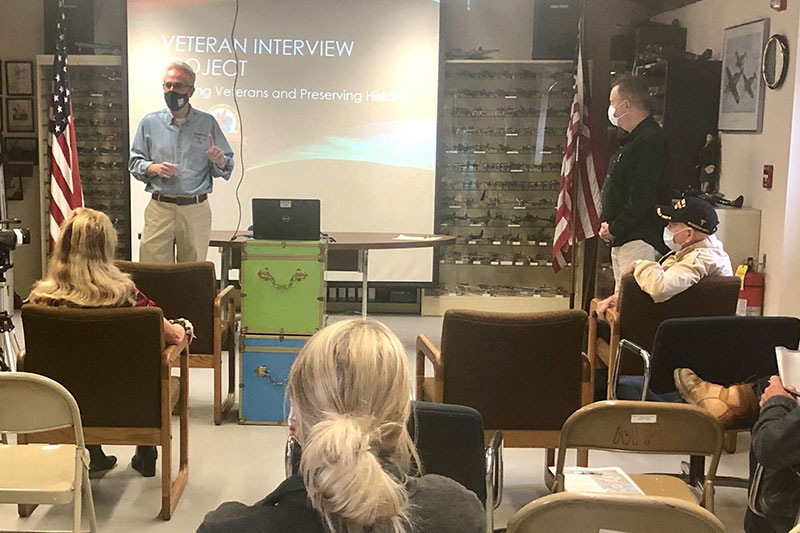 Bob Trivellini of Millville, is Vice President of the Board of the Museum and a former History teacher and long-time Program Coordinator and Grant Writer for Millville Schools. He has 19 years of experience in facilitating the Veterans History Project. 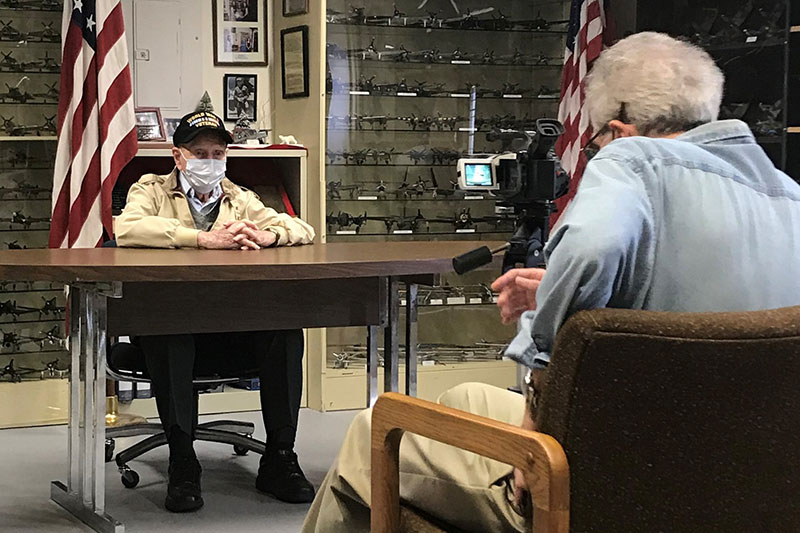 Tim Kiniry, of Vineland is our mock veteran interviewee, and 99-year-old veteran and former US Army medic. He treated the wounded at the Battle of the Bulge and the prisoners at Buchenwald Concentration Camp shortly after liberation by the US Army.

These services and programs provide support, and assistance to veterans.
www.wehonorveterans.org

Help.org provides a guide of comprehensive information on substance abuse statistics among veterans, governmental programs that offers treatment, and steps that veterans can take to get the help that they need. To learn more visit: https://www.help.org/substance-abuse-rehab-for-veterans/

Angelic Health provides Palliative, Transitional, Hospice Care, and house call primary medicine and TeleHealth services, and is proudly accredited by the Accreditation Commission for Health Care (ACHC). ACHC accreditation reflects our dedication and commitment to meeting standards that demonstrate a higher level of performance and patient care. We are also a member of the National Hospice and Palliative Care Organization (NHPCO), the Center to Advance Palliative Care (CAPC), and are privileged to be a hospice partner in the We Honor Veterans initiative.

Signup for our Newsletter

on Facebook, and sign up for Bylines, our monthly e-newsletter to get tips and stories on how to deal with life's challenges. You may want to also read our recent Angelic Health's Touching Lives magazines for insightful articles to enlighten and inspire you.